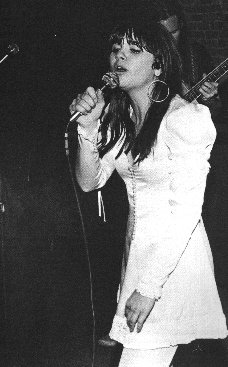 Welcome to the Linda Ronstadt discography! This work is the result of over 20 years of collecting. Like all collectors I began as a fan. I first heard Linda on the radio doing “You’re No Good." The guitar riff in the middle (thanks Andrew) attracted me because it was so Beatle-esque (and I was a Beatles fan). I bought the album and I have been hooked ever since. The collecting of Linda did not begin for at least a year. I had already been a Beatles collector for over a decade. It was (and still is) a fascinating and expensive enterprise to obtain all of the odd things that are available by them. At the time I began collecting Linda I was in a lull in collecting the Beatles, and I needed someone else to collect. My wife Sue suggested that I collect Linda. I took her advice and began. I decided early to make my collection as extensive as my Beatles collection was (or in some cases as I wished it was). I would try to obtain all of the promos, colored vinyl, etc.

It was difficult at first because she is not an artist that record dealers specializing in collectibles usually carry. That has changed over the years as now I find the local dealers in my area gunning for me when they feel that they have something I have not seen before. Sometimes they do. I thought I was alone for a while in my quest until I started networking with other collectors around the country. The internet has connected me with quite a few more. Through the years I have got to meet other Linda fans (Including Linda herself!) I have enjoyed talking to them and learning more about my hobby. I got more and more questions about what was available so I decided to put together this list based on what I had been able to find over the years It was fun going through everything and to see what I actually had. In some cases I found that I had three or four of a few things. After 11 months here it is. But there are some limitations which I will explain below.

The following is a listing of all of the released material known to exist through June of 1996. The list includes all vinyl releases (LPs, 45s,12 inch singles, and bootlegs). CDs are also included. The list also includes promo materials and special releases such as radio shows. Not included here are the numerous guest appearances she has made with other artists as these are too numerous to chronicle on the first pass. I am planning to cover this issue in the next edition with hopefully all the detail that I used in this edition. (Research has already begun) This list is aimed at collectors like myself who make it a point to try to get everything. For those interested in song lists, release dates and other interesting facts, I have included these as well.

When necessary, there are notes included which will alert you to special features of the release or inform you of a bit of trivia that is important or special to it. With a few exceptions this list will not include imports unless the import features something that is not available domestically either as a recording or as an item. This is particularly true of the import singles which almost always have a nice picture sleeve. I have listed them here. There are import versions of a lot of Linda Ronstadt's albums, but besides that they are imported they are no different from the domestic release. I have many of these releases but I did not include them here. Later editions will include these.

Linda’s career sees her primarily on 2 labels, Capitol and Elektra/ Asylum ( now simply known as Elektra or in some cases Elektra Entertainment)She left Capitol in 1973 after being with them since 1967. Her albums for that company fall under the following 5 labels. The original 1960s Capitol label is the black label for LPs. The standard changed in 1969 to a Day-Glo green label, (and for a brief while a red variant) and in 1974 to a flat Orange one. After that it changed to a purple label. Linda’s Capitol work has appeared on all of these labels. The purple label remained until the entry of Cds. Except for the green label promos of the late sixties, most of the promos are white label. Capitol failed initially to issue any of Linda’s early albums on CD with the obvious exception of the album Heart Like a Wheel. Her earlier Capitol work was for a time only available on CD as imports. Her remaining Capitol albums were issued on CD in the US in 1995 with the exception of A Retrospective which to this day remain unreleased on CD.(it is still available on cassette) 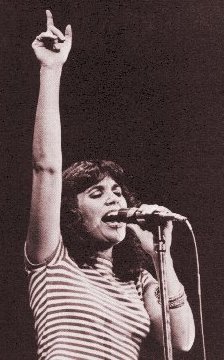 The Capitol singles in Linda’s career begins with the orange and yellow swirl label (Promos appear as flat green) and then jump to the orange label, and then finally to the purple label. Capitol also took to issuing Linda’s material on “knock-off” labels. Most of these issues were made in limited runs and were cheaply put together. Through this medium she appears on the Pair, Pickwick, Capitol Special Products, Pickwick, and the Realistic label, to name a few. These issues offer nothing but interesting collectibles to find. Her work has also appeared on countless hits collections featured in television offers and such that are appearing all of the time. Asylums' labels are primarily the standard “clouds” label until they took to creating custom labels for Linda’s releases beginning with the Simple Dreams album. The singles pretty much stayed with the clouds label except for a brief period where you could find Linda’s singles (and one album, Hasten Down the Wind) on a flat blue label.

Promos are mostly white label through the 70s. In the 80s the company issued the promos of the albums with custom labeling on the standard label. They also released a lot of her singles on the “Spun Gold” series that has a yellow label. Her albums have also appeared on special half speed mastered issues by Nautilus and Mobile Fidelity. The oddities in her releases are fun for the collector. There are 7 songs of hers that never made the albums. So Fine Lago Azul (Blue Bayou in Spanish. It is only available as a single.), Carnival Bear, I’ve Got to Know, Rambler Gambler, Can It Be True, and Very Lovely Woman. The hardest one to find is the “So Fine” single issued on Sidewalk in 1967. Other than these examples all of her songs appear on her albums (many more than once). There are a few colored vinyl pieces and 2 picture disks. (One of them is an import.)

There are very little differences in the Mono releases as opposed to the stereo releases as most of them are simply direct copies to Mono(usually for radio promos). Cassettes are not listed here because frankly I never collected them. There is a bootleg version of the never released “Keepin Out Of Mischief” that is available on cassette among collectors. A few slicks of the cover of this album are also around and it stands as probably the most valuable Linda collectable around. There are also audience tapes around from the various tours that are available on cassette. Since these are not manufactured releases I will not chronicle them here. There are a few bootleg records available. These began appearing in the late 70’s and as records they are collectable. Most of them have the “bootleg humor” that was prevalent on such releases and many of them lack good documentation. The ones I have been able to obtain are listed here. With the exception of a few cuts on the “Linda Ronstadt” , “FM”, and the “King Bisquit” stuff there really is very little live material available commercially. Her live appearances are better chronicled through the various tapes that are available among collectors.

I realize that this by no means a complete list, but it's close to one. I welcome corrections and additions to this list for future editions, which I hope to issue about twice a year. Please feel free to call or e-mail with your input or questions. As Linda is still a current artist I suspect that she will continue to issue more releases that we will continue to collect. I will also give you due credit for your input. What I will need is for you to follow the format found below. A photo-copy of the item would be nice as well. Future editions will have other features added. I will add Linda’s appearances on other artists recordings, a more complete list of imports that are available, and any other features that I will deem fitting for this work. Please forward all questions and suggestions in any form you wish to:

I would like to thank the following people for their help in putting this together who without their encouragement (and help) I would have never finished it. To my wife Susan ,who is a singer herself, for advice on the formatting of this work and getting me interested in collecting Linda in the first place. (A suggestion that she says with tongue firmly in place that she has learned to regret!)To my friend Alan Glaser who has found some of my nicest pieces and for helping to make me the envy of all of my “Linda” friends. To all of my AOL friends, particularly Beachbear5(Rob) and JustSpends(Sandi), who have given me many hours of great conversation and collecting stories. To Andrew Gold who helped bring my collecting to another level in ways that only he would know (don’t forget the shakers!!!!). To Ira Koslow for help and encouragement. And finally to Linda herself whose singing and music we will always enjoy ....and for patiently signing a few CDs for me over the years.

The format for the discography is as follows. Style is the type of item(LP,45,cd,etc.). Title will be the name of the album or the A side of the single. Company will be the label.. Special notes will have any significant commentary on the piece that makes it special, particularly to collectors. Release date is the best known date of release.


This Document and its Formatting © Rich Bailey